Nestled at the foot of the Cotswold hills in Gloucestershire, just as they begin to rise up and woods cover the landscape, lies the Roman villa at Great Witcombe, built in the second century AD with additions continuing on-and-off until the fourth. I’d walked up from the village, following the footpath along the field edges, bringing me to the base of the buildings which are terraced into the hillside above.

There’s not a lot of information at the site itself, but the building spreads along the contour of the hill, with three or four different levels of structures running down the slope. There’s numerous rooms, the most obviously identifiable being a set of baths at the bottom, now partly covered by modern buildings to protect its mosaics. I peered through the windows into the gloom, and was disappointed that I couldn’t make anything out. I sat down and stared outwards instead.

In its elevated position, I realised that it would have been visible for miles with the villa facing outwards towards Ermin Street – the Roman road from Gloucester to Silchester – running along about a mile or so to the north. This old road rises up onto the Cotswolds, so anyone coming down the hill on their way into Gloucester would have seen it quite clearly, the bath house out in front. Even two millennia ago people liked to flaunt their wealth.

I looked back down the route I’d come along to the villa, the path across the fields, and wondered if this was the original way in. If I was a rich Roman showing off my big house, it’s how I’d want my guests to see it as they arrived. It made me think about the path I’d come up, making its muddy way up here and how parts of it at least might follow a very old route indeed. 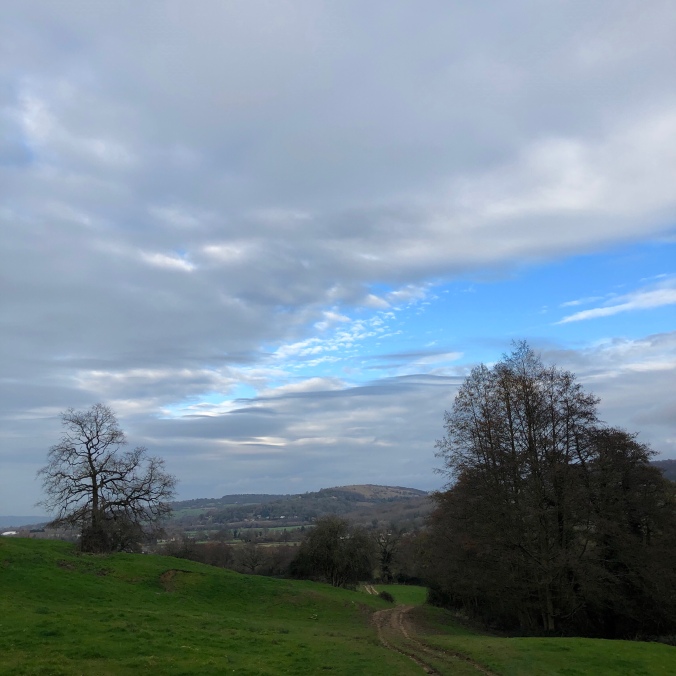 Looking back down the farm track across the fields

Later on I read more about the villa in Tim Copeland’s Roman Gloucestershire and saw that archaeologists think that there was a track coming up from that direction. There’s also a sketch of the view from the villa drawn in 1918 with the path winding its way up seeming to follow exactly the route I took. I realised that it’s so easy to think of little tracks like these as being ephemeral and limited, easily changed and moved when they’re more likely a long-held part of a landscape’s history. Even a mud track can be tenacious.

It was one of those afternoon walks which took on more of a life than I’d expected. I’d looked across this modern landscape and gained a sense of how someone long ago may have experienced it too and manipulated it to their own ends. Walking down the track, past the reservoirs where coots and geese bobbed on water and back to my car which was parked outside the 12th-century church I was taken by the amazing sense of history you can get walking around a small parish in southern England.

How to get there: there’s plenty of information provided on the English Heritage webpage for the villa including free parking. This takes you in from a different direction to that described here. I parked outside the church in Great Witcombe, the footpath I took located just back down the road.

Out with the In crowd! #peoplesvote #peoplesvotemarch #bollockstobrexit
Bright, cold and beautiful. Great morning for a walk. #wintermorning #winter #frost #frosty #wintersun #ice
Crocuses and frost. #winter #wintermorning #whenisspring
The sun is shining, the sky is blue. I’ll take that. #sun #blueskies
Avebury, a perfect day out. #stonecircles #silburyhill #avebury #archaeology #winterdays
I love being surprised in my own town! This is awesome. #streetart