High above the Severn Valley at the top of Frocester Hill, where you can look west across to the Severn estuary and the hills of the Forest of Dean, is a small-ish structure made of stone, soil piled up around it. The stones form an entrance behind which are three chambers. This is Nympsfield long barrow, a burial place with a history dating back almost 6,000 years, into what archaeologists call the Neolithic period, the time when farming reached Britain but people still weren’t using metals. It’s the kind of place that I can’t help but feel a little knot of excitement, being in the presence of something so old, yet still here. 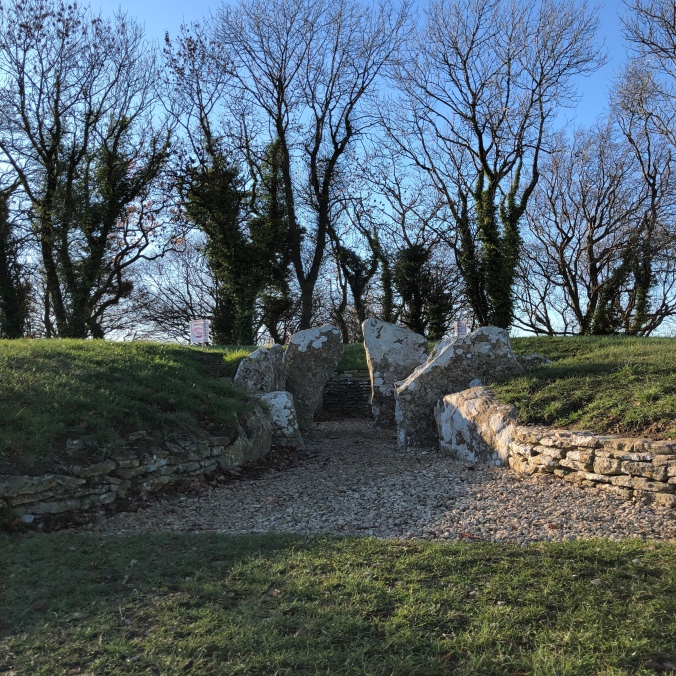 These days the stones are open to the sky, the chambers visible and easily entered with there’s nice gravel on the floor, but it wasn’t always like this. When it was built a mound covered the stones, now long since ploughed away. The entrance was formed of two sets of big stones, the rear ones leaning towards each other making the space through to the chambers pretty small. Rather than a just taking a deep breath before shuffling between them, like I had to, to get in you’d have to go down on hands and knees to squeeze through the gap. Once inside, the chambers would feel much smaller, cramped and dark. And you’d be among your ancestors. 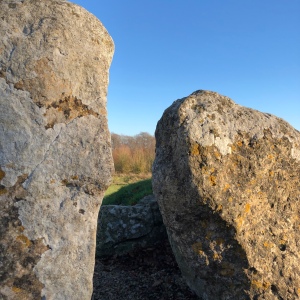 Stones forming the entrance to the barrow

The bones of around 13 people were uncovered in these chambers when it was excavated, along with the remains of a dog or two, our ‘best friend’ for thousands of years. At some point people decided to block it up, and it was filled with stone. As the oft-quoted phrase goes (well, by archaeologists anyway) ‘the past is a foreign country, they do things differently there’ because whoever blocked it up with stone also littered it very deliberately with pig’s teeth, most of them just single teeth, not jaws or skulls, so it wasn’t just rubbish or the remains of a feast. Quite why, of course, no-one knows but that’s one of the fascinations of places like this. There would have been feasts there, though, so seeing picnic tables by the long barrow felt like a wonderfully nerdy joke set up by English Heritage.

I hadn’t actually deliberately gone to visit the long barrow – well, maybe just a bit – but to have a walk on a sunny Sunday afternoon, so after having a good look around, while my family patiently waited for me, we went off along the Cotswold Way glimpsing the Severn valley through the trees. The sunset when we got back was reason enough to consider it a good spot for a barrow.

How to get there: Nympsfield Long Barrow is locates right by the car park for Coaley Peak picnic site and viewpoint on the B4066 opposite Woodchester Park (also with a visit- lovely walks). The postcode is GL11 5AU.