Heading along the road towards Marazion, Cornwall, from the A30 affords the first view of St Michael’s Mount. The huddle of buildings on the top of the island makes it look bigger than it perhaps is, but it’s the obvious focal point of Mount’s Bay. I visited a while ago with my family taking photos with my old iPhone 6.

It was a pretty murky and chilly day, and for some reason I mucked around with black and white rather than colour. Looking at the photos now they seem to catch the mood of the weather quite well, and I thought I’d share a few. They’re all outdoor shots as those from inside the castle didn’t come out all that well.

Given to the abbey on Mont Saint-Michel by Edward the Confessor in the 11th century, it was a religious house until the Dissolution in the 16th century, with the earliest buildings dating to the 12th. It’s had an interesting history: besieged (several times), captured, damaged by an earthquake and passed from church to secular ownership. It’s in a long, curving bay and the sweeping causeway heading from the town to the island makes a visit more like a pilgrimage.

The sea in Mount’s Bay was calm and gentle, the Mount near-silhouetted with heavy clouds behind.

The smaller rock in the foreground, next to the north end of the causeway, is where the boat to the island leaves from at high tide. The murkiness of the day is pretty obvious in this picture.

The tidal causeway, gently curving its way to the island.

The beach was covered in seaweed, including this fine piece.

In Cornish folklore, the giant Cormoran created St Michael’s Mount where he then lived, raiding for cattle on the mainland. This is the Giant’s Well. 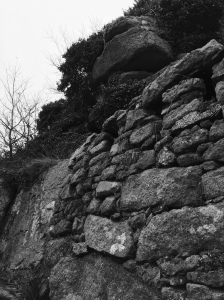 Just before you get to the castle is this massive retaining wall. The bedrock, different sizes and textures of the stone made for an interesting picture.

How to get there: St Michael’s Mount is located just off the coast at Marazion, Cornwall. There’s several car parks. The postcode for the central Folleyfield car park is TR17 0EG.