Who doesn’t love a pebble? Find one on a beach and it’s hard to resist throwing it in the water, especially the flat, thin ones ideal for skimming. What I’ve rarely thought about, though, is how that piece of stone happened to end up there, nicely smoothed and rounded on the beach. So this post is about just that.

I recently spent a few days with my family in Budleigh Salterton, a small coastal town in East Devon, to recharge the batteries over the half term holidays. Budleigh’s pebbly beach shelves steeply into the sea and at its western end red cliffs rise up. It is one of my favourite spots to sit and ponder, and on this visit I went to have a look the cliffs. 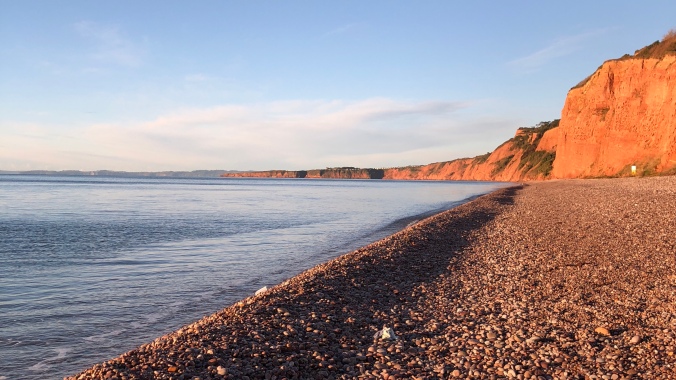 These rise up to about 50m or so, and I discovered they’re made up from two distinct rock types. The top half, below more recent gravels, is a thick band of red mudstone deeply eroded in places to give some wonderful shadow and texture. It glows yellow-orange in the morning and evening, quite a sight against the beach and sea.

Below this and making up the bottom half of the cliff is something totally different. Pebbles. Or rather, to use its proper term, a conglomerate, a rock composed of pebbles within sands and silts. As I looked up at this huge layer I realised that these pebbles were the source of the beach I was stood on, and this made me think- how did it form; how old is it; and where (and from what) did all those pebbles come from? Putting on the geologist’s hat I last wore at university I decided to delve a little. So here, give or take, is the story of a Budleigh Salterton pebble, and with it something of the story of the planet we live on.

The Budleigh Salterton Pebble Bed at the base of the rocks, mudstones above

The conglomerate I discovered is called the Budleigh Salterton Pebble Bed. It dates to the Triassic Period about 200–250 million years ago, just around the time the dinosaurs first appeared. They formed in large rivers and flash floods across the deserts of the ancient supercontinent of Pangea, rocks being carried by water from mountains somewhere around modern Normandy and Brittany which bounded the Pangean deserts of Devon. They were tumbled and rounded into pebbles as they moved. The mountains were thrust up millions of years before in the Ordovician Period, somewhere around 450 million years ago. It’s the erosion of these mountains from which the rocks which formed my Budleigh pebble emerged.

The pebbles themselves are made from a stone known as quartzite. This is a type of metamorphic rock, meaning it’s a rock whose structure has been changed by heat and pressure. In this case, it happened when the Ordovician mountain building took place, with two geological plates coming together and squashing the rocks in between, some being lifted thousands of metres to form mountains. But what kind of rock is the starting point for quartzite? Quartzites come from sandstones, the ones in my Budleigh pebble laid down in an ancient ocean which we know from the fossils from these strata in northern France.

Before this the quartz obviously came from somewhere too, and eventually going back to volcanic activity, but that’s another story. So my Budleigh Salterton pebble was an ancient ocean floor, was lifted up into a mountain, eroded and rolled by a huge river flowing into the arid desert of a supercontinent becoming part of a massive bed of pebbles. These bound together into rock, and we’re eventually exposed at the surface again becoming a beach I enjoy visiting. Quite a story for a small, unassuming stone which makes a nice sploosh as it hits the water.

So next time you pick up a pebble, look at it and think about where it might have come from. It’s an amazing thing. Like my Budleigh pebble, it could contain a story half a billion years in the making.

See also: for a different look at Budleigh Salterton see Swimming in the Sea

How to get there: Budleigh Salterton is on the East Devon coast. A large pay & display car park at the east end of the beach has the postcode EX9 6JD.

Safety warning: cliffs are dangerous places and the ones at Budleigh Salterton have problems with falling rocks. When I visited there was fencing, signs and slumped material in places at the bottom of the cliff faces making it pretty clear they’re eroding and unstable. I only looked from a safe distance on the beach.

2 thoughts on “Hidden stories: the amazing life of a Budleigh Salterton pebble”