The bus dropped me in Kingswear up above the marina and the station for the steam railway. Lying on the eastern side of the River Dart in Devon it’s opposite the town of Dartmouth, my destination for the day, a popular spot for tourists in the summer and also a medieval port set back about a mile or so from the open sea along the sides of the estuary. I lingered a while, taking in the view upriver. Dominated by the Britannia Royal Naval College on the hill outside the town, the core of old Dartmouth sits by the water, so I headed to the ferry at Kittery Point, the medieval landing place for Continental pilgrims to Canterbury and embarkation point for settlers to America who founded Kittery in Maine. First mentioned in the mid-14th century, it’s still the only way to cross the river.

Taking just a few minutes, the ferry affords the first view of the mouth of the Dart, the low but steeply-sided valley thickly wooded, a castle on either side, drawing your focus towards the sea. As I wandered the old town, busy with tourists, it revealed its age. The narrow streets around the small harbour are a mixture of medieval and early modern timber-framed buildings alongside Georgian and Victorian. The town museum on Duke Street is housed in an ornate 17th-century colonnaded merchant’s house, so close to the road it’s almost impossible to photograph.

I’d spotted the tower of the medieval St Saviour’s church poking above the surrounding buildings from the ferry, sitting on higher ground above the harbour. Reaching the entrance, I felt an inner fizzing of excitement I sometimes get in old places- the door was covered in images. Decorated church doors aren’t that common so to come across one was something special. The ironwork is centred around running two lions, head turned outwards with their claws extended. Behind them is a tree, its branches, leaves and curving tendrils filling the rest of the space. It has a date of 1631 underneath one lion, but the door itself is older, probably sometime in the 15th century and much of the ironwork might be this old too. 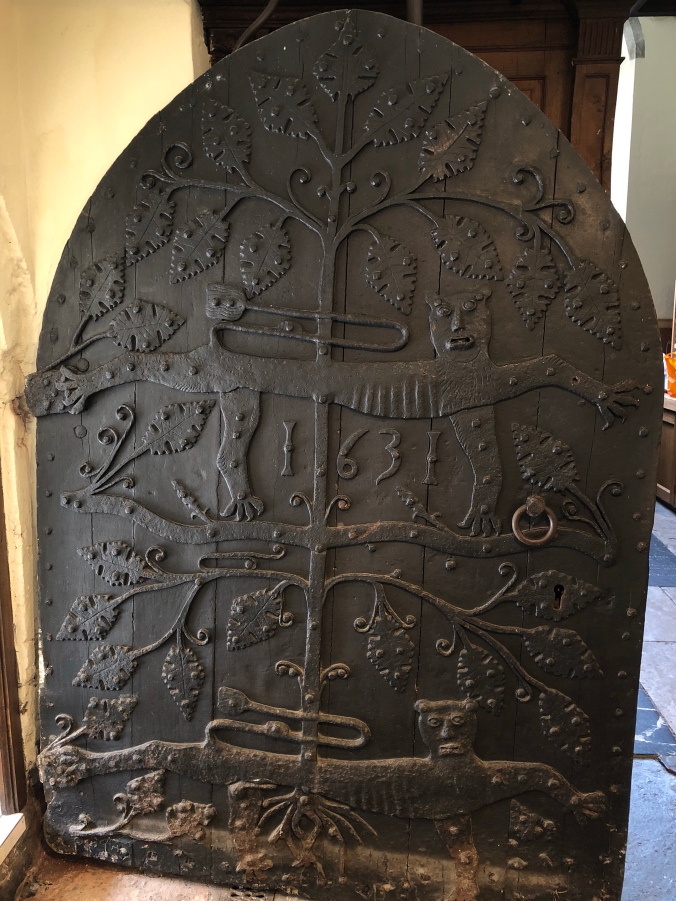 Walking into the body of the church, above me was a 17th-century gallery, dated 1633, its dark wood carved with flowers and plants, interspersed with painted heraldry, and in front a rood screen – a partition which separates the nave of the church from the cancel which holds the altar – described as one of the finest in Devon. It dates to the late 15th century and is made up of 11 bays of carved and painted oak, all greens, reds and gold, the ornate decoration organic and delicate. Looking through the rood screen into the chancel, I could see the altar with its legs made up of carvings of the Evangelists. These were from a 16th-century communion table but I couldn’t get any closer as the doorway through the screen was firmly tied shut with a piece of fabric. The church really is a hidden gem in the town centre. The nearby streets had been so busy, yet I was the only visitor. A shame in a way but I enjoyed having it to myself. 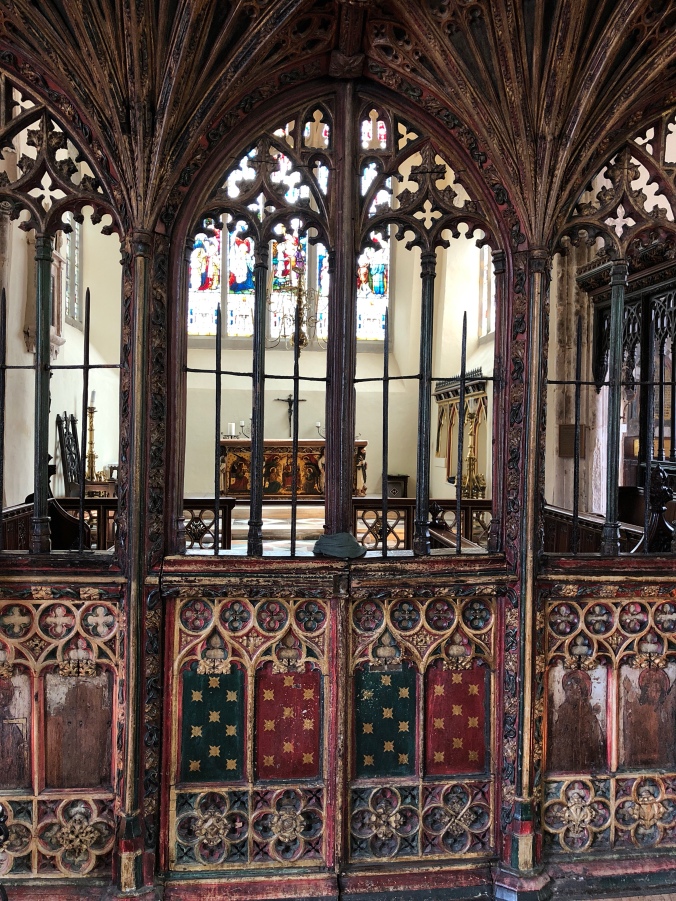 Leaving the church I decided I wanted to walk – as I often do – and headed on the road towards the sea passing the lovely quays of the South Embankment and Bayard’s Cove. There’s a Tudor fort at the latter built to protect Dartmouth from attack by the French but it’s currently undergoing renovation so I couldn’t go in. As I walked my attention was constantly drawn towards the water, the views across the river and out to the sea, as were most of the houses along here, with big windows and terraces. It was hard not to just stop and watch the world go by,

From here on fewer houses and more woodland made for a quieter atmosphere, even with a reasonable number of people heading towards the castle. The coastal path continues to the mouth of the estuary where Dartmouth Castle and the Church of St Petrox stand on the headland before the coast swings away to the east. I sat soaking in the sun, ice-cream in hand, watching the translucent blue-grey water, craggy wooded coast and a group of kayakers paddling around the cove below. It looked like fun.

The castle itself, built in the 14th century, along with Kingswear Castle on the opposite bank of the estuary, protected the two ports from attack by the French. It’s had numerous periods of reworking. The Napoleanic-era additions are now prominent with its various batteries of cannons and storerooms, including some very narrow passageways. An unusual medieval feature was my favourite, though. In order to stop enemy ships from entering the river mouth, a large chain was strung between the two castles in the 15th century which could be raised and lowered as needed, and the location of this can still be seen. It’s not all that often you come across castles which weren’t also the homes of wealthy aristocrats so the lack of formal rooms was a bit of a surprise. A functional place with a defined job to do. It’s an interesting and enjoyable visit, small and well worth a look, the constant views of the estuary and coast which are all around you and it’s a delight. 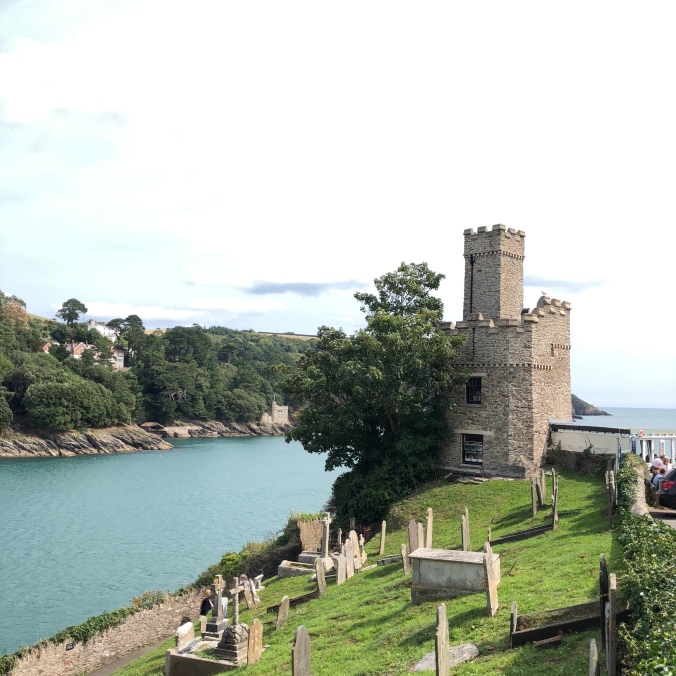 As I started my way back into town I followed the path down to the castle’s ferry where a small boat goes to and from the town centre. I waved to the ferryman to say I wasn’t travelling with him and was left alone in the quiet of the trees with the water glugging against the rocks. The juxtaposition of the two castles, Kingswear the furthest away, and surrounded by trees felt like they had been deliberately placed to be as pretty as possible. It deserved a few minutes just to sit and take it in, and I had to drag myself away in the end. 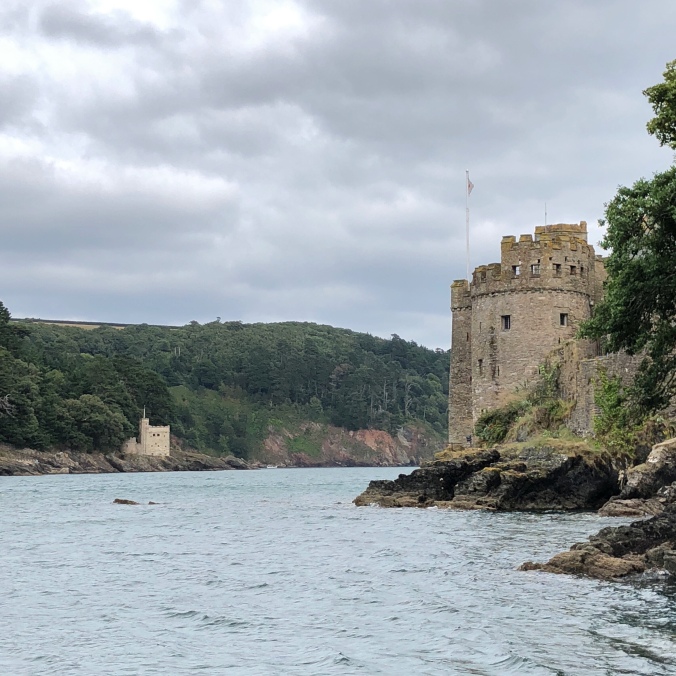 I caught the old, lower ferry back to Kingswear from Bayard’s Cove, alone on foot among the cars. No-one charged me for the ride and I was just met with a shrug and a friendly smile when I mentioned it. As I walked back up the steep hill to the bus stop I reflected that even though Dartmouth was a busy, touristy place this time of year, I’d had a surprisingly peaceful day down by the water, in the woods, looking out to sea and exploring the history of the town. I’d spent the day wandering with no particular plan. It was probably the best thing I could have done.

How to get there: Dartmouth and Kingswear are on the A379 road from Torbay and A3122 from Totnes, the former crossing the River Dart by ferry. I caught a bus from Paignton (in Torbay) which took about 20 minutes and cost £5 for a ‘day rider’ ticket. The ferry cost £1.50 as a foot passenger. Another ferry goes from the town centre to the castle although I didn’t take this.

Other info: Entrance to Dartmouth Castle costs £7.50, and there is a cafe and shop on the site. Both churches (St Saviour’s in town and St Petrox by the castle) were open all day and were free to enter but obviously a donation is always appreciated.

3 thoughts on “Two castles and a church: a wander around historic Dartmouth and Kingswear, Devon”